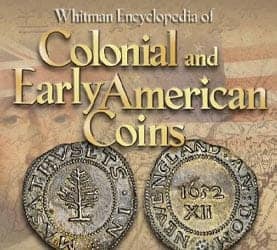 In our last Coin Commentary (gee, time sure does fly around here) we reprinted a review of the new Whitman Encyclopedia of Colonial and Early American Coins by Wayne Homren.

Since then, we’ve read a lot of comments about the book in chatrooms and have heard a lot of people discuss it at shows – and frankly a lot of what we’ve heard has been pretty critical in the following areas:

1.  There are a number of errors in the text, and in images.

2.  The numbering system used (new Whitman ID #s in series for which there are already well established and accepted varieties, such as Maris numbers on NJ coppers) is unnecessary and frankly unwelcome.

3.  The URS (Universal Rarity Scale) is also not necessary or welcome.

4.  The pricing is incorrect on some coins, both on the high and low side.

5.  A number of people have said that “they would have written it totally differently”.

So we thought we’d offer our two cents.

Yes, there are unfortunately errors in the book, ranging from simple typos to incorrect rarity ratings and incorrect photos (which is perhaps not unexpected in any volume which contains the sheer volume of information see here).  Some are minor, some not-so-minor, but all are being identified and assembled by the President of the Colonial Coin Collectors Club so they can be corrected in the next edition.  So if you see something amiss, by all means let us know and we’ll pass the info on to the right people.  On the other hand, the overwhelming majority of info and images are correct, making this an invaluable reference and ‘one-stop-shopping’ for people to bring to shows and use to look up information on a myriad of colonial coins and series (which is far better and more convenient than carrying a Redbook, a Breen Encyclopedia and a pile of specialist catalogs to every show).

As for the new Whitman numbering system employed throughout the book, we are of two minds:  We can understand why people would be reluctant to abandon tried and true numbering systems (such as Maris numbers on New Jersey copper varieties) which have served the hobby well for a century or more, though we suppose the same thing was probably said to Sydney Noe when his work on Mass silver years was published years ago.  But it did catch on.  Our view is that if a new, better system is developed for any series, why not use it?  And if the new numbering isn’t an improvement, it probably won’t be adopted.  No harm in trying though.

The same can be said for the URS (Universal Rarity Scale). If it works for people, they’ll probably start using it.  If it doesn’t, they won’t.  If you take the time to read and understand it, you’ll see that it is pretty logical, and very simple.

As for pricing, that is bound to be the most controversial area of any book, the most fraught with peril, and the area which will most quickly go out of date.  In the Whitman book in particular, I think what is listed is no more or less accurate than what has ever appeared in print, and is certainly no more incorrect than what has been included in the Redbook for years.  Our advice is to take all the values listed with a grain of salt, and consider them indicative at best.

As for those who think they would have done it differently, or better, I say have at it.  If anyone out there can write a better book, I believe people would enjoy reading it.

In the meantime, we’ve found the book incredibly useful and efficient, especially for attributing state coppers on the bourse floor (more useful and efficient than any other single reference or source we know of, and a whole lot more convenient than bringing our entire library of other references and catalogs to every show).