Ah yes, there is nothing like traveling all over this great land to attend coin shows. But as much as we really enjoy them, there are occasional instances (such as during a 6 hour flight to Portland next to a screaming child) that we wish we could hang out at home more often. But we just can’t run this business like that. While not every show is a blockbuster, we do buy and sell interesting things at virtually all of them, meet new collectors and dealers, and glean (if gleaning is not specifically prohibited in that venue) interesting market information.

We received in our office recently the first Libertas Americana medal in a PCGS extra large slab, which looks pretty neat: 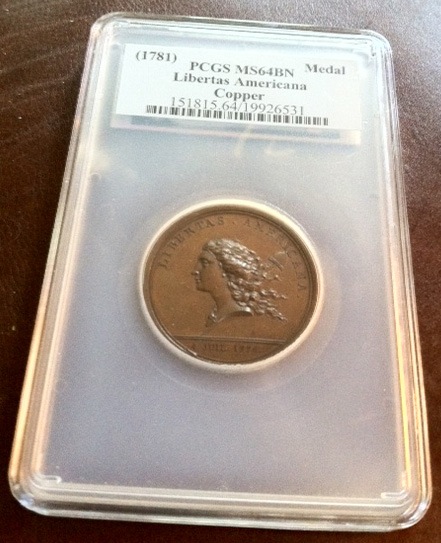 If you study the price trajectory of these pieces through the years, you’ll see that they hadn’t done much for years, until the first PCGS graded piece (raw, but with an accompanying photograde certificate) sold in a Stack’s auction in June of 2005 for multiples of any previous result. Since then, these pieces have become increasingly popular, with NGC slabbed Libertas Medals appearing in auctions and the Redbook including these pieces at the beginning of the federal section. In our view, PCGS now slabbing them represents the final step of Libertas Medals moving firmly into the numismatic mainstream.

Where are all of the people who predicted $80 per ounce silver, or even $150 silver? We kept bumping into them at shows a few weeks ago (despite our best efforts to avoid them).

You may have noticed that we have been quietly increasing the total number of all coins on our site over the last 6 months, which is partly a function of people offering us a lot of cool stuff that we had to buy.

Speaking of which, we sometimes talk to collectors who have material to sell but do not offer it to us because (and I quote) “It is probably not high enough grade for you guys”. To which we always respond by saying that we like to offer colonials, early type and interesting esoteric material on the website in any grade as long as the coins are choice and the values make sense to us. Which explains why we have recently had colonials on the website in the august grades of G6 and VG10, and have an early large cent on the site at this very moment graded G4.

Dave spent most of the last couple of days counting and collating the silver dollars that a customer traded to us in exchange for a coin on our site, and while this was a bigger deal than most, customers trading bullion for rare coins has become almost commonplace around here.

We’ve seen some pretty lean auctions lately . . . and we have never seen the auction companies pursue consignments so aggressively (and we know what we’re talking about, since our table has generally been right near all of them at shows and they have not been shy about stopping by to ask for material).

As of this morning, we are down to two of the gunmetal hats left. So if you want one, we recommend an approach of non-procrastination.

We continue to be surprised at the softening prices of US generic gold coins. At this stage of a bull market in gold bullion, these coins should be moving up considerably – or at least having huge price swings – due to telemarketer promotions. No such activity has been seen.

As we are getting closer to ANA World’s Fair of Money, we are starting to wonder exactly how an 8-day event is going to work. What has historically been a terrific show will this year be a marathon testing the stamina of collectors and dealers alike. It is very hard for us to imagine that this will be an improvement over the historic format, but time will tell.

But we have many miles to travel and shows to attend before that, starting with the Long Beach show next week. And while over the last few years some dealers have either stopped attending, or have opted to walk the floor instead of taking a table, we’ve been aggressive, continuously improving our table location as others have dropped out, and pursuing whatever cool coins we see (and there are always some) in a less competitive environment. Hey, we aren’t complaining . . .