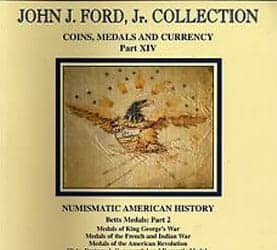 We like coin auctions as much as anyone, but this week at Stack’s was pushing it.

We had 4 separate catalogs to be offered in three separate sessions over a three-day period which, of course, would end just in time for us to catch that flight to the Long Beach Show.  Which is exactly the glamorous life of a coin dealer that collectors dream about and that has been featured in so many Hollywood films.

The first catalog was the Ford XIV session beginning with Bett’s Medals and concluding with struck copies of Colonial and Early American coins.  Other than a few of the ‘cross-over’ Bett’s medals (i.e. those that are popular among the more mainstream collecting community, such as Libertas Americana medals), there wasn’t much of commercial interest for us in this immense run of beautiful, historic and often very rare medals commemorating various wars, famous people and Benjamin Franklin wearing a fur hat. As an aside, my personal recommendation is that if you are sitting for an important portrait, take your fur hat off. You won’t regret it.

We watched with interest through this session as some of the well-known early American specialist dealers bid on many items, interspersed with collector bids and some large numbers being thrown around by some (apparently, based on their refined accents) European dealers.

Of note was the lovely silver ‘Kittaning Destroyed’ medal ex-Garrett at $90,000 hammer, an XF ‘Quebec Taken’ medal in gold at what experts believed was a very reasonable $32,500 hammer and a lovely but silly-named ‘John Paul Jones, Engagement off Flamborough Head’ in bronze at a civilized $9,500. The better of 2 silver Libertas Americana medals hammered for $110,000 to a collector, while a group of 8(!) copper examples ranging from approximately Choice AU to XF sold for $18,000 to under $5,000 hammer respectively.

As an aside, its interesting to watch how the various dealers assess the raw items at Stack’s during lot viewing, as they scrutinize an item of interest, tilt it in the light at every conceivable angle, discuss it with colleagues, look at it again and then jot down ’55 shot 58′ (substitute your grade guess here) in their catalog and prepare to bid accordingly. Yes, raw coin auctions are not for the faint of heart, I guess. Those who are good at grading may get some bargains. Those who are bad at grading may prevent someone who is good from getting those aforementioned bargains. The end result is that it is not easy, is in no way a sure thing and involves high risk and high reward. If you have the guts based on your knowledge of the items offered and/or their likely grades you can either do well or get slaughtered. Maybe both. It sure is fun.

The struck copies of colonial coins in the Ford collection were particularly interesting for us, as many of the items offered were famous coins plated in the definitive reference books on these series. A fake Pine Tree shilling is a pretty cool and collectible thing in our opinion if it was produced circa 1840, is plated in Crosby’s ‘Early Coins of America’ and appeared in an 1867 auction catalog. The ‘original’ (as in ‘original restrike’, I guess) Good Samaritan Shilling shocked most of us on the high side at $40,000 hammer, while the crude but attractive and famous Novum Belgium shocked on the low side at $7,500. Comparing notes after the sale revealed that many of us had a higher planned bid on the latter and inexplcably we all sat on our hands during the session. I suspect if one of us had bid the next increment, several others would have jumped in and the price realized might have been double. As it is, the winning bidder ‘ripped it’ and it could probably be resold today for $15,000 to more than one potential buyer.

Auctions are funny and inefficient things and the flow of the bidding, sequence of lots, possibly a distraction in the room, etc. can influence who bids and who doesn’t in unpredictable ways. There were multiple examples of this throughout the session, including one memorable gold coin that was going just fine until a bidder announced loudly that he had made a mistake on the previous lot. The auctioneer very kindly said they would finish the current lot and then go back to the previous one, but this ended up in moderate chaos when apparently the key players didn’t understand that and the second lot closed with two other bidders announcing that they would have paid substantially more and one shouting ‘$5,700!’ for a lot that was already closed at $3,200. Stack’s held their ground on that one, which was fair to the other bidders. At that point, though, we were pleased we were not the consignor.

But back to the colonials – of note also were a group of Bolen restrikes of some of the rarest colonial items but struck in silver, and all with ancient, original patinas indicating they had been sitting unmolested for about a century waiting for us. You almost never see silver coins of any type as original as these.

The session continued onto a run of currency which we skipped. I’m guessing there might have been some good buys in there for someone energetic enough to sit in that room at 2:00 AM bidding away. I don’t know, I was sitting in a bar at the time with a couple of dealers where perhaps the most remarkable thing I’ve ever seen occured: Two attractive, younger women actually hit-on a coin dealer (not me, of course). I’m afraid I can’t elaborate beyond that. If I hadn’t been there myself, I would simply not have believed it.

The following night saw a long run of colonials through gold, and which included some fantastic slabbed(!) type coins.  A consignment of hand picked early type all slabbed in late 80s era holders went strong but not crazy, including a very eye-appealing 1793 Half Cent in an XF40 ‘fatty’ (though with a few nicks and scratches) at $18,000 hammer and a 1795 Flowing Hair Dollar ex-Garrett in a 1989 PCGS AU55 holder (though a bit too-shiny) at $67,500 hammer. This group of coins were interesting and instructive in that various bidders had figured them in different ways: We saw them as nice original coins in sexy older holders and set our bidding levels based on our desire to keep them exactly as is. Some other collectors and dealers (I dare say the vast majority) were figuring them as crack-outs, possible ‘conservation’ targets and upgrades, the key question for them being how many points would they upgrade and what could they pay based on that. Clearly, for us to acquire any of them, we would have to pay very significantly higher than the Graysheet levels, but we were happy to do so. Choice, original coins like these are awfully hard to find and when you do find them, they are not inexpensive.

So how much of a premium above sheet would you pay for an original, choice coin? If your answer is ‘merely’ 10 or 20%, then I guess you can’t be too surprised if some enterprising dealer decides to crack, conserve and upgrade them and sell them for signficantly more to someone else. You don’t have to like it (we don’t), but it shouldn’t surprise you.

In all, the type was classy and, in our opinion, reasonable for what it was, while the gold seemed to go on the stronger side. The 1797 $5 plated on the catalog cover, for example, was in a PCGS green AU53 holder and looked considerably better than that to us. It finally hammered down at $130,000 to the guy next to me. He seemed pretty happy and possibly relieved that after sitting patiently for about 2 hours to bid on one coin he hadn’t wasted his time. I suspect that coin will appear next as an attractive though less original AU58 in the future in the name of capitalism.

Later on in the gold there was an interesting run of 1892 $5s that were remarkable only for their originality. I’m not sure of the source of these coins, but they had evidently been together for a long, long time, were reeking of absolute originality, but were in a number of cases only moderately attractive. Many had spots (dark spots, not desirable copper spots). I kept thinking that all of the people who like original coins and regularly state as such in the various chatrooms probably wouldn’t have liked these.

In all, there were some great coins at good prices, some lousy coins at high prices and most everything in between.

Knowing which ones were which was the trick.