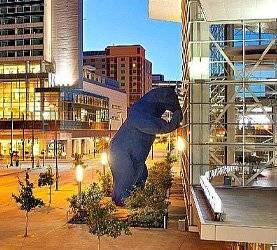 While our readers may have come here expecting to see exciting news about our flights from New England, or possibly something about a lost bag, instead you are going to get some heavy-duty numismatic content as I describe the two-day ANA-sponsored seminar that I (DW) attended, along with a dozen other men and women, prior to the show.

Titled “Facing the Chinese Counterfeit Threat”, the course was taught (not surprisingly) by a podiatrist from Alabama named Dr. Greg Dubay.

Actually that’s true, but Dr. Dubay is also an Iraq war veteran who has devoted the past several years to learning about and educating others about the counterfeit US coins currently being produced by Chinese factories.  And this is pretty serious stuff, evidenced by the fact that the last audience for this presentation was a little outfit called The United States Secret Service in Washington, D.C. As an aside, Dr. Dubay assured us that the Secret Service is serious about enforcing the laws in this area, but they lack resources.

Nevertheless, there are several ongoing prosecutions of counterfeit coin importers and the dealers and mules that are selling them, and more on the way.

So what did we learn:

As some of you may know, it is perfectly legal to counterfeit coins in China, as long as they are dated prior to 1949(!). That includes coins of all nations (Chinese too!).

There are factories of various sizes that operate out in the open, with employees, buildings, and all the necessary government licenses. The largest of which has many employees, uses surplus presses from the Philadelphia mint that were shipped to China in the 1920’s, and churns out something like 100,000 counterfeits per month.  And most (but not all) of these coins are US counterfeits.

I found the course absolutely fascinating, especially the entire day devoted to hands-on examination of the various qualities of counterfeit coins and coinage dies.  We saw plenty of coins, including dangerous counterfeits that have even slipped by all the grading services.  The services do an excellent job of weeding out these counterfeits, but no one is perfect.  Counterfeit slabs were also discussed.

At the end there was an optional “final exam” consisting of 15 Morgan dollars spread out on a table. 14 of them were the finest of the counterfeits coming from China these days, and one was a genuine coin.

At the start of the course, Dr. Dubay rattled off the names of several prominent numismatists who failed this test. Being a competitive sort, and having years of experience in the counterfeit detection arena, I made up my mind then and there that I was going to pass.  So with the coins lined up in front of me, I studied for a long, long time and ultimately narrowed it down to two before finally making my selection.  Which, I am delighted to report, was correct.

I am less delighted to report that it was pretty difficult, the quality of the fakes was outstanding, and, according to Dr. Dubay, some of the most deceptive examples of coins and dies have arrived from China only in the past 2 weeks.  It is safe to say that if not for the information I picked up here, I do not think I could have passed.

Which makes taking a course like this mandatory for any serious dealer IMO, and an excellent idea for a collector too.

Let’s see how Team CRO is doing so far this week:

Dave: Arrived Monday.
John: Just showed up at midnight Wednesday after discovering he had accidentally booked two different flights to get here, cancelled the wrong one, and incurred a massive penalty in the process.

Dave: Set up the CRO table at the show, by all accounts an exceptionally good location which could not be any closer to the door unless it was a knob.
John: Went to bed.

Dave: Bought and sold some cool federal stuff during a relatively quiet (as expected) dealer set-up day.
John: Just woke up and had a coffee.

So the good news is that we are now in sync and ready for action, all of which will be described right here on Friday AM.

I am delighted to report that I arrived at the show at 8 AM on Thursday, obtained my badge from the ANA staff in a more efficient and speedy process than you might have expected, walked into the show, immediately spotted our table #711 directly in front of my face, though I did note the complete lack of a CRO banner (since the ANA’s booth set up doesn’t provide a space for one.)

More shocking, I saw our own Dave Wnuck already ‘in position’, presiding over our cases and engaged in numismatic activities.

And so I quickly joined in, spreading out the rest of the robust CRO inventory like butter on toast (if the butter was a selection of choice and rare colonials, federal and esoteric items).

After which I was able to make a series of ANA National Money Show observations:

And then, at about 6 PM, we headed out with a couple of dealer friends including one local who knew exactly where to go, which on this night was a cool restaurant in Cherry Creek where we sat outside on the patio in perfect weather, had a great time and discussed (and solved) all of the important numismatic issues of the day.

Friday we expect the show to be pretty similar to Thursday, and hope to finalize a few pending deals to fill out our EB scheduled for next week.

I would say without hesitation that Friday at the ANA was one of the most surprising days we’ve ever had on the coin circuit for 4 reasons: 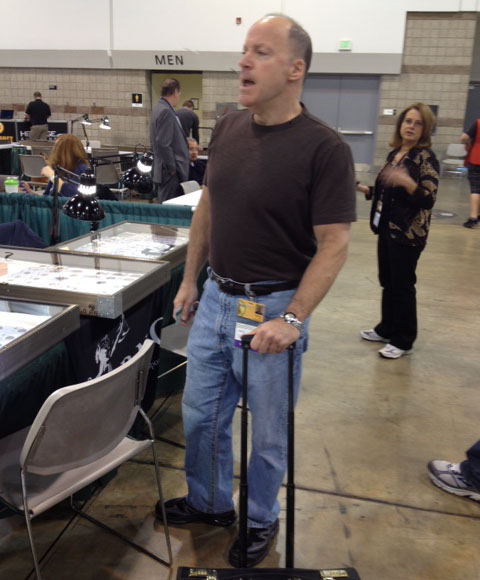 So, to what do we attribute this unexpected flurry of activity at the table?

And then, with our last 3 sales conducted very late in the day, we packed up and headed out to dinner to celebrate another dealer’s birthday, which turned out to be a hoot and included grilled avocado (first time for me), and celery ice cream (first and last time for me).

So what can we expect Saturday?

We have no idea, but it is entirely possible that it will be another very good and very busy day here in Denver, and we will be ready for action if it is.

May 12th:  The Exciting Conclusion

And while that is the tagline used by the New York State lottery since the early 1990’s, it also nicely describes our experience at the Denver ANA, a show which exceeded our expectations in every way (except for the celery ice cream on Friday).

With a lot of cool NEWPs, great sales, active numismatic horse trading and an especially interesting seminar combining to make this an excellent week for CRO.

Which we now look forward to capping off with quite possibly our best Early Bird ever on Tuesday.

But now, since it’s Mothers Day, I need to stop typing immediately and go help the kids prepare breakfast in bed, since last time they tried that on their own there was an extremely unfortunate accident with the maple syrup.  And trust me, no one wants to see that happen again.