We are delighted to numerically summarize the month of November (or Novembuh, as we say here in Massachusetts) right now:

None:  Airplanes boarded this month, and thus a welcome respite from the non-stop travel we usually do during the year.  We still enjoy that, but it is nice to have some continuous time here at home for a while.

Just one:  Coin shows attended – a local one out in Devens reachable by wheeled conveyance.

60:  Total cost for us in dollars to set up that show.  Seems like a good deal to me.

Also 60:  Diameter in mm of each of the 6 Jacques Wiener Architectural Medals we acquired there.

Two:  EBs sent out this month.

102, of course:  Coins listed on them, since every one always contains exactly 51, which still does not prevent people from continuing to comment to me that a given EB is either “longer” or “shorter” than usual(?).

38.2%:  Portion of those coins that were from the 18th century or older(!).  Even to me – the guy who assembled those lists – that seems like a shockingly high %.

VIII:  Regnal number of the Monarch pictured on it (as in Henry VIII): 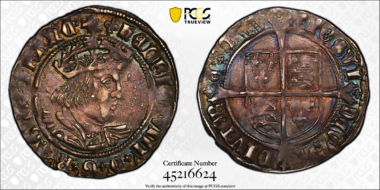 G06:  Lowest graded coin we sold (though as vociferously expressed in the website description of this item, we would have called it ~VF30).

Only 1:  Known population of the rarest coin we sold.  Making this now 6 unique coins we have sold through the years.

8.5 Hours:  Time we spent curling this month (the kind you do on ice).

About 42 Pounds:  Weight of a curling stone.

6 Long Years:  Wait list duration for us at the local curling club before we were finally able to join early this fall.

Probably one more:  Planned EBs for the rest of the year.  So you might want to keep an eye out for that . . .