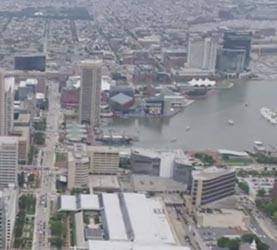 I have to say we are as enthusiastic as ever about this event, partly because it’s always a great show in this venue, partly because this fall installment includes the Colonial Coin Collectors Club Convention and partly because we have not attended a major show since Long Beach in mid-September and are thus champing at the bit for some major coin activity.

Which will begin with lot viewing at the convention center, early coin grading at the Sheraton and the requisite wholesale activity at the Hilton before we start the actual show itself with dealer set up on Thursday morning.

The results of which will be described every morning right here in this space.

Thursday began as every other Baltimore show has in recent years, with your author waking up waaaaay too early, getting organized in the room, schlepping a large, heavy and extremely awkward supply bag over to the convention center and then waiting in the lobby with a bunch of other early risers for the bourse doors to fling open.

And, as soon as they did, stampeding to our table location just left of the door as fast as possible (which often isn’t that fast if you get stuck behind one of several otherwise well-meaning people who gum up the works by slowly wheeling an enormous cart piled high with coins in boxes and bins through a narrow door).

But I did get there eventually, and then unleashed a fury of table setting up in a carefully orchestrated, well-practiced process in which one middle-aged coin dealer can hang a banner, plug in 42 extension cords, set up 3 lights, fill three cases with carefully organized coins and be ready and open for business in about 7 minutes.

At which time I was free to explore the bourse floor, trying to find cool stuff for sale before someone else could 1) Spot them, and 2) Buy them from out under the CRO numismatic nose.

And, as is always the case, I found things to buy despite stiff competition, a minefield of the aforementioned work gummer uppers milling about, many / most dealers not even being set up yet and your author not being as fast as he once was.

With this year’s early haul officially deemed “above average”, including mainstream slabbed and CACed federal coins, decidedly obscure raw world coins, things from well-known major dealers, coins that had recently walked in over the counter at a pawn shop, and one coin that I could not identify but which I thought I could figure out later.  Even so, when all was said and done all this high octane activity would ultimately represent only about 25% of our total purchases during the very productive 10 hours we had at the show on Thursday.

With our bourse floor scouring interrupted (in a good way) buy a pretty steady flow of visitors to the table, many of whom bought something, traded us something, sold us something or looked at something which they may end up buying later. Not to mention a few auction coins we snagged too.

And then, come 6 PM, it was time to head over to the Colonial Coin Collectors Club reception at the Sheraton to renew acquaintances, listen to speakers talk about Latin American coins which circulated in early America and kibitz for a while before I ran out of gas and had to call it a night.

Which all added up to a first day which was pretty busy, commercially successful if not record setting and highly entertaining, leaving me with a lot of neat NEWPs to now process, deals to follow up on and the promise of a lot more to be done on what I expect to be a very good Friday.

Whatever happens, you’ll be able to read all about it right here in about 24 short hours from now.

I believe I predicted right here yesterday that Friday would be a good day on the bourse floor and I am here to Road Report that indeed it was, with an even balance of purchases and sales that our inventory management team (i.e. me) appreciated.

Starting at the table with sales of a couple of world coins and a nice early copper, culminating with the purchase of an early gold coin fresh from Europe late in the day and filled with all kinds of deals, large and small, coming and going, in between.

Including purchases of a purely speculative, impulsive, seat-of-the-pants nature, and other acquisitions that were more methodical, including two stunning Mexican coins we were delighted to find to fill empty slots in two different customer collections.

Unfortunately, but not surprisingly, we could not find a few of the other coins we were looking for at this large show, though I suppose it’s possible they’ll magically appear on Saturday. If they do we’ll jump on them; otherwise we’ll keep looking. Hey, some of these thing are very, very hard to find.

In the surprising category would be the relatively light (at least so far) colonial activity here, with just a couple of purchases and sales at a show where this is usually a focus. Which once again illustrates that we never know what is going to happen at these events, and pretty much have to be ready for anything.

And on this day, the anything included participating in an evening auction at Stacks-Bowers in which prices were literally all over the map, with one of our target lots selling to someone else for exactly 3x our max bid (and twice the price of higher grade piece sold in a different auction a little while ago).  On a more positive note we also bought two coins at the very end for about half our max bid, which I have to tell you is an extremely nice way to end a day at a coin show.

So I did, turning in on the early side to be ready for a Saturday here during which I once again have absolutely no idea what to expect, but will endeavor to make the most of whatever happens.

Hey everyone! Let’s recap the just-ended Baltimore show with another one of our patented CRO Thumbs Up / Thumbs Down lists:

Thumbs Up: Got a cool hotel room in Baltimore on the Club floor with access to the groovy Club Lounge.
Thumbs Down: Upon checking out on Saturday I asked why, and the employee at the desk casually mentioned that I “had the single highest room rate he had seen for the week and they felt bad for me”. Seriously, I would sack my travel agent straight away if it was not yours truly.

Thumbs Up: Saturday was by far our best sales day, with action in all categories from the moment I walked in until about noon.
Thumbs Down: The overall total was merely decent, not great, but certainly reflective of the modern market where more and more activity has moved to auctions and the internet. Not sure how the guys without websites make it work.

Thumbs Up: I bought a lot of great things here, including many more coins on Saturday right up until it was time to go.
Thumbs Down: There was one coin sitting in a world coin dealer’s case that I wanted, but he was away from his table each and every one of the half a dozen or so times I went back to buy it on Saturday. Should we conclude that it simply wasn’t meant to be?

Thumbs Up: Was excited to see a different coin we sold years ago in another dealer’s case since we have a new customer who would definitely want it.
Thumbs Down: It was priced about 3x higher than when we sold it, and at least 2x an optimistic current value, which of course is not gonna work.

Thumbs Up: I was surprised and delighted to get back my PCGS 5-coin world grading submission at the show since they told me they weren’t sure it could be done here.
Thumbs Down: Guess I should have given them the other 30 raw world coins in my box.

Thumbs Up: Was cool to see, for what I believe was the first time ever, anywhere, a complete collection of Vermont Coppers on display in the C4 (Colonial Coin Collectors Club) section, with even the spurious Ryder-40 included ‘just ‘cuz’.
Thumbs Down: Glare from the convention center lights made it impossible for me to photograph.

Thumbs Up: A clean, comfortable and shiny new Uber ride to the airport costs about $40.
Thumbs Down: I’m really going to miss those rides in the filthy 20 year-old Baltimore cabs with no shock absorbers for the same price.

Thumbs Up: I had plenty of company at the airport, with most every New England coin dealer on my same flight.
Thumbs Down: Said flight (the last one we could get) left at 4:10 PM, making for a very harried schedule.

Thumbs Up: Our next Early Bird Notification will go out Tuesday at noon and will be chock full of cool coins in all categories.
Thumbs Down: It’s another mad dash to get the images completed and then finish the descriptions before then.

But we’re used to it by now, so I don’t think that’s going to be a problem –