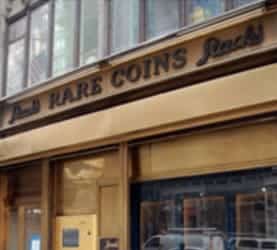 Hello and welcome to this one day, quick hitting, extra special, bonus Coin Commentary in which we 1) Detail today’s journey to the Stack’s-Bowers offices in NY and 2) Offer some admittedly not-that-keen insight into a day in the life of a coin dealer. Like me, for example.

And this day would begin, predictably, at 3:00 AM, a start guaranteed by three (3) separate alarm clocks (including one which was plugged into an outlet on the other side of the room so I would have to get up to turn it off). Fortunately, none of that was necessary, since the dog started barking like crazy at 2 and woke us all up anyway.

After giving that dog a stern lecture, and doing some brief organizing, I was in the car on the way to the train station, from where I would embark on what figured to be a nice, comfortable and only slightly nauseating 3+ hour jaunt into midtown Manhattan.

And while I did not feel all that great when I got on that train, something about that crummy re-circulated air (or possibly the fragrant cologne someone in my coach was wearing) had me sneezing like crazy.

Which eventually subsided when I arrived in NY, exited the station, breathed in some of that fresh NY City air and then quickly assembled (with hundreds of other people) into a looong taxi queue which proceeded to not move at all for 20 minutes.

Until cabs came spewing around the corner, at which time I got in one and zipped off to Stack’s-Bowers, arriving crisply at 9:15 AM.

Where I was delighted to see that lot viewing was already taking place, a bunch of people I know were in there viewing, and there was still a good seat available for your author.

And believe me, I used it, for the next 8 hours continuously (pausing only to eat a complimentary bagel and partake of the delicious beet salad), viewing as much as I could in the colonial, federal, world and currency sections with great care, from all angles, making sure I saw everything I needed, reading the catalog descriptions seeking clues where necessary, double checking areas of concern on specific coins I had noticed in the online photos, and finally determining what would be “in”, what would be “out”, and what needed a 2nd look next week in Baltimore (such as on the three expensive coins which were not in the boxes since they were noted as “still at PCGS”).

And then I left, catching a late train, arriving back home after 11 PM and finally going to bed, exhausted, precisely 23 hours after I had woken up on Thursday.

But there will be no rest for the weary, since I will be up and out early on Friday AM for the Bay State show, details of which will appear right here in our next regularly scheduled RR in just about 24 hours from now.