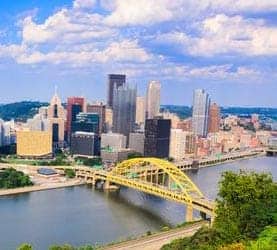 Optimistically, I headed down to the hotel lobby on Wednesday morning, walked briskly out the front door and stepped directly into a fine mist which would have been excellent for growing orchids, but which was unpleasant for the couple of block walk to the convention center.  Made worse by the fact that although the building wasn’t that far away, I ended up walking almost completely around it searching for an entrance door which was not locked.

Fortunately, I was eventually successful, walking in and encountering a large ANA Convention sign almost right away, taking an escalator up, walking down a hall, and arriving at the bourse about 5 minutes before the doors were officially opened.

At which time I made my way to our table, hung our banner with the able assistance of the tallest person I could find (which in this case was Julian Leidman, since our own Dave Wnuck will not be here until Thursday), stepped back, admired our handiwork, and then was immediately told by the security staff that we needed to remove it (a message evidently delivered to all the other dealers in the room at the same time, as every other banner in the room suddenly vamoosed).

And while that was disappointing, I got over it, and focused on putting out our inventory, submitting coins for grading and then looking for cool stuff to buy during the PNG-only portion of the day (i.e. the time from 8 AM to 3:30 PM during which only PNG dealers and their invited guests were allowed in the room).

A mission which was, as it always is, challenging, as there were only 50 or so dealers in the room, not too much out on display of the non-Morgan Dollar variety, and the continuous sound of dealers rifling through other dealers’ boxes.

Which continued pretty much unabated until 3:30, when all the rest of the dealers started setting up (including a lot of local guys I have not seen before on the circuit), a ton of coins were put out on display and I tried to look through all of them in the limited time I had before people started leaving.

And while it was a pretty quiet day, I did accomplish a little:

And then it was time to go, so I headed out with some dealer friends to a restaurant called Mexico City that was not that close to the convention center.  Fortunately, it was still raining, so of course we decided to walk and get thoroughly drenched on the way there (which we achieved), had a nice dinner, and then walked back to the hotel so that I could drip all over the lobby when I got there (which I did).

Tomorrow should be more active, with the show opening to the public at 9 AM, and our own Dave Wnuck making his triumphant arrival, hopefully bringing with him our federal inventory, and, more importantly, an umbrella

Having eschewed the free breakfast at the hotel (which consisted of the never-before-seen and extremely unappetizing combination of steak and artificial eggs), I casually strolled to the convention center, arrived just on time at 8 AM, got the table ready and prepared myself for what I hoped would be a good day at the show.

Which would begin, as always at these ANA-run affairs, with a podium and a bunch of speeches from about a half dozen guys in suits, which I could hardly hear at all, but which must have been fantastic since they were punctuated every few minutes with applause from the crowd of people waiting to get in.

And not long after that finished, our own Dave Wnuck walked in carrying with him a bunch of federal coins, some of which we would end up selling about 11 minutes after he unpacked them.

Which is not to say that there was any kind of frenzy here – there was not.  In fact, the attendance was quite light, but those that made the trip seemed pretty serious, and we ended up doing surprisingly good and reasonably steady business across all categories, on both the buy and sell side.

Some of which was utterly unpredictable, like the cool lion dollar that walked up to the table in the AM (and which we snapped up instantly), and the sale of some raw federal coins that we were not even planning to offer at this show.

What was predictable was lunch, since we ordered sushi from the Westin again, which included some of the best seaweed salad your author has had this side of Osaka.

Also good were our grading results (including some complicated special ones that PCGS helped us out with), many of which we unleashed right here at the show and plan to describe in vivid detail on our next Early Bird on Tuesday, unless someone buys them before then, which the way things are going is frankly not impossible.

And then, late in the day, we tweaked our final Heritage bids and then headed up to the auction room for the start of the 6:30 session, bought a few things, saw several unsolicited photos of Bill Nagle’s new Corvette engine (since he was sitting next to me), and then headed off to dinner with Chris Karstedt from Stack’s-Bowers which was an absolute hoot and ended with a Scrabble challenge which might not sound cool, but which I assure you actually is.

Then we headed back to the hotel to write this RR and prepare to wind it all up again tomorrow, during which we will hope for more of the same (except that part about the podium and those speeches).

I am going to be honest with you here – I was not quite feeling 100% on Friday morning after a late evening on Thursday which may or may not have included 3 bottles of wine for the 4 of us at the table (though admittedly one person did haul part of one back to their hotel in a doggy bag, presumably for breakfast).

And so I walked gingerly to the show on Friday, trying to avoid bright light (which was easy, since it was raining again), and loud noises (which was harder, since the walk includes passing under a very serious looking railway bridge and through rush hour traffic).

Still, I did arrive pretty much on time, which was good, since the show kicked off at precisely 9 AM, and within minutes we sold a nifty Oak Tree Shilling.  Which would turn out to be one of a bunch of things we sold on a day which exceeded our expectations both selling (since most of the relatively few people wandering around the room and coming to our table all bought a coin or two), and buying (since it included about a dozen coins, three of which tipped the scales at over $20K each).

Which seemed to be better than a lot of the dealers told us they were doing, though a lot worse than one guy who told me he was having (and I quote) a “mega-event”.  To which we probably contributed, buying one truly wild piece from him in the afternoon and then twirling it in the light back at our table for 15 minutes afterward.

A number of the rest of our NEWPs were coins that I (JA) am proud to have scouted out somewhere on the floor and then had Dave go assess and determine if it was a “Go” or a “No Go” (something I enjoy but which I believe drives him crazy).  Regardless, most of the things turned out to be “Go’s”, meaning they will be unleashed soon on an EB near you.

Also, we got more grades back, though as time went on, the results seem to have gotten worse, which might be my imagination, though I do not think so.  The moral of which might be to submit coins for grading early and often.

Anyway, we kept ourselves extremely busy until I suddenly noticed it was 5:30, at which time it was necessary to pack up and race out the door to Morton’s with a good dealer friend where we ate well and had an extremely fine time (though with considerably less drinking than on Thursday).

And then headed back to the hotel to get ready for Saturday, our customary get away day, though not until we hang out at the show until 4 or so and do as much business as we can possibly do before leaving (so if you are in the vicinity, and have something to offer, we welcome you to find our table and offer us something).

Saturday began with that fun get-away-day ritual of checking out of our hotel and then hauling our extremely heavy luggage the few blocks through busy city streets to the show, which is always a massive pain in the neck, but which could have been even worse if it had been raining like it was most every other day here.

But it was merely overcast on Saturday, affording us a dry opportunity to survey the downtown scene one last time, immediately noticing that a series of barricades had been erected in the street just outside the convention center and a line of police motorcycles were in place apparently in anticipation of an ‘Occupy Pittsburgh’ protest which we believe was specifically scheduled to wreak havoc with our departure to the airport later in the day.

But we decided we would not worry about that, instead focusing our attention on the show, where we hoped to do some additional business before organizing a massive number of coins and sifting through the surprisingly tall stack of paperwork we had already amassed here.

Which almost immediately got a little bit higher when a customer who had visited the table late on Friday and checked out a few coins (none of which seemed all that interesting to him at the time) unexpectedly returned Saturday morning to buy two of them, getting us off to an excellent start.

After which business continued nicely despite the small crowd in the room, as we sold coins ranging in price from $100 (for a damaged Fugio in an NCS holder which was the least expensive item in our case by a considerable margin) to a group of colonials to another dealer in the lowish four-figures (who flat out told us he planned to crack them out and try to upgrade them) to 2 cool things in the low five-figures before noon.

We bought a few more nice coins too, including 4 Fugios, other assorted coppers, some cool Morgan toners that were not insanely priced, several spectacular old-holdered proofs, and one extremely cool Civil War Token which is almost guaranteed to appear in an upcoming CRO ad.

At which time the show turned into a defacto Boy Scout Jamboree, with a huge line of scouts entering the show and participating in some kind of ANA Treasure Hunt that seemed to be extremely popular.

And then, late in the day, we began the slow process of packing up, cleaning up and reflecting on what turned out to be an unexpectedly good 4 days for us, including the purchase and sale of a lot of cool coins and neat deals as follows:

Which, in addition to everything else that happened here, made this a pretty good show about which we are not complaining at all.

We’ll be off on Sunday, but back at it Monday AM preparing for our next Early Bird on Tuesday, which will include some extremely good things that you cannot find anywhere else.  So you might want to keep an eye out for that.