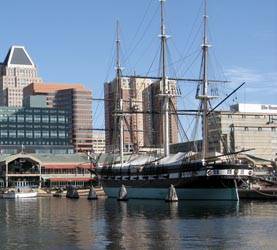 As is our usual M.O., Team CRO actually zipped down to Baltimore on Tuesday of this week, stormed into the inner harbor before breakfast, dumped our stuff at the hotel, headed straight to the PCGS pre-show room at the Sheraton, submitted a bunch of show grading and then like lightning proceeded to the Bowers lot viewing room where we camped out for nearly 2 full days poring through the thick, desirable-coin filled catalogs of U.S. and colonial issues.  Wow, I’m totally exhausted just reading that.

It was time extremely well spent though, since arriving early Tuesday allowed us an uncrowded initial look at the coins of highest interest, before a bunch of other viewers would show up and hog all the lot boxes sometimes for hours on end.  Seriously, I have never had any idea why it takes some people so long to view, and sometimes suspect it could be like college where a professor would assign some library reading and some ultra competitive classmate would just go check out the book for hours so no one else could read it in time.  Hey, it’s possible.

But we got through it all, started to formulate bidding strategies, spoke to clients we are representing and narrowed the whole offering down to the coins of highest interest.

Interrupted only by an occasional shout of “Hey, I have coin for you” from various other dealers hanging out at the convention center on Tuesday-Wednesday, of which we have, so far, seen 5 of the coins in question and agreed to buy all of them (which is not always the case in this scenario, but quite an excellent outcome when it does).

With all of that activity serving as a form of super dry numismatic kindling which we expect to errupt into a raging inferno of coin activity when the show opens to dealers at 8 AM on Thursday.

Where we will be active buyers, sellers, traders, schmoozers and, of course, bloggers, reporting on each and everything that happens at this show right here in this space every morning.

Numismatic Travel Tip #211:  If you drop a hand towel on the floor of your hotel room, do NOT try to punt it into the bathroom. If you do, you may inadvertently smash your foot into the heavy steel door frame on the follow through and thus put a real damper on your Baltimore Show experience.

I know this because I attempted said kick early on Thursday morning with that precise outcome, and as a result ended up missing some prime time bourse floor hours from 11 to 1:30 during dealer set up limping across town and having X-rays taken at the very pleasant downtown emergency room.

The good news is this only took the 2 and a half hours, and revealed merely an impressive sprain.

Aside from that, everything would go swimmingly on this day, as Team CRO was fast to set up, make some solid sales in several different categories and, despite scouring the bourse floor at a slower pace than usual, was an enthusiastic buyer of primarily choice, original, thoroughly CACed, frequently old-holdered and especially eye appealing U.S. coins of all kinds.

Including in the auctions too, where were surprised and delighted to win a number of interesting gold coins that 1) We really liked, and 2) Figured we’d get outbid on, since a lot of these sorts of things are also targeted by the guys who bid super aggressively on choice original stuff so they can then ruin it and get it into shiny new upgraded holders. Fortunately that did not happen here, not sure why, not going to worry about it.

With the rest of our day here spent largely focused on colonials, including showing coins here on the floor, checking out other dealers’ offering, reviewing upcoming lots in the Thursday evening and Friday auctions, finalizing bid levels with customers we are representing and generally schmoozing with all of the C4 (Colonial Coin Collectors Club) guys who are in town for this event.

Then heading out to dinner with a collector friend while viewing the auction with one eye on the excellent Stack’s-Bowers app, returning in time to attend some interesting lectures at the C4 reception in the evening, including an overview of Cobs by Dan Sedwick, and a neat presentation about St. Patricks coinage by Syd Martin who has authored a new book on this series.

Which you author followed with rapt attention whilst keeping his foot elevated per the instructions of all of the doctor customers who came to the table on Thursday.

Before finally heading back to the room to review auction lots online, write 52 emails and talk to a couple of west coast collectors while placing said foot into the hotel room ice bucket (with apologies to the next guests who will probably just use it to put some cubes in their drinks).

Anyway, we have to say that on balance it turned out to be a good day overall, commercially productive, informative and entertaining, and put us in a good frame of mind to go absolutely berserk (in a thoughtful and responsible way) during Friday’s auctions.

And then write about all of the results here bright and early on Saturday AM.

Starting just as the show opened at 9 AM, as your by-then more mobile author scoured the far reaches of the bourse floor, finding a variety of interesting, high end, totally CRO style items and then bringing them back to the table, placing them variously in our ‘to be photographed’ box, grading box, CACing box or ‘let’s figure out what to do with this later’ box which we have now done to the tune of something like 40 NEWPs in total here, in all categories.

And that’s not including our auction haul which was pretty good in the afternoon session which we attended live for the first 20 or so lots and then handled by proxy bid the rest of the way.

Allowing us plenty of unencumbered time to work with table visitors, and that was going pretty well too, with strong sales to new and long-time customers alike, some outright for straight-forward cash, others via trade or partial trade, and one more by credit card for a coin we did not actually bring with us and will now ship from the office on Monday.

Also looking good: A fair amount of our show grading, where we have received back some very reasonable but still not easy to actually achieve results.

But we would have to wind all of that bourse floor activity down early so that we could head upstairs for the Friday evening Stack’s-Bowers Archangel Collection auction which would require careful preparation, laser focus and the ability to react on the fly to whatever was happening.

And I think we did pretty well, buying many coins including some we theoretically ripped for fractions of our max numbers, and others we stretched (on tiptoes, as one would do to reach a seldom-worn hat on a high closet shelf) to acquire.

Of course, we never really know which will turn out to be the best buys until months later, when all the dust settles, as these things are inherently hard to predict. I will say that we were approached right there in the auction room by people interested to buy some of the coins we won, so we can safely say those are lookin’ good so far.  Editor’s note:  The full, profusely illustrated Archangel story will be coming soon to our Coin Commentary section.

After the final lot was hammered down, we headed to the hotel bar for the standard post-auction decompression with (almost) everyone who was there to discuss the coins over a beer (or 6 or 7), where we learned who bought what, picked up some interesting todbits, recieved some wildly inaccurate mis-information and generally had a fine time like we always do.

But after a while we were dragging and had to call it a night in anticipation of what figures to be a very busy Saturday in which we’ll need to pack up, check out, schlepp bags, settle all of our unfinished show business and then head home on a late flight which I personally predict has about an 83.5% chance of being delayed by weather and which I hope does not force us to hang out at an airport hotel for another day.

Whatever happens, we’ll recap it right here in this space in just about 24 hours from now.

Now back home and (almost) fully caught up, let’s wrap up the 2018 October Baltimore show with one of our patented ‘Series of Random Observations Presented in No Particular Order’:

We ended up shipping a pretty healthy 53 NEWPs off for photography at the end of the show, among them some especially choice, original gold coins.

But not including the PCGS White Rattler which walked up to our table on Saturday AM (since we sold that less than an hour later). That was one of 18 old-holdered coins that were offered to us by attendees at the show, of which I think we bought 16, including a small stack of unusual coins in Doilies. So keep them coming!

Picked up our various auction winnings at Stack’s-Bowers where we are pleased to say we liked them just as much as we did during lot viewing. Perhaps that seems an obvious comment, but it isn’t always a given, since opinions can change based on mood, or lighting, perhaps some new information, etc.  And while there were many other interesting coins in that session, we didn’t really regret any that got away based on one of more of the following considerations:

One additional benefit of our auction purchases here? It allowed us to swap out our planned 2019 PCGS calendar coin for something even cooler. Way cooler, in fact: 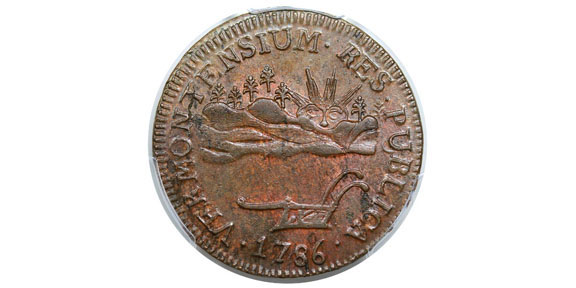 As some attendees may know, 50% of Team CRO (i.e. my wife MaryAnn) had to leave Baltimore early to take care of a family matter, meaning I had to fly solo for the last day and a half and then pack up and schlepp all of our supplies through those long airport corridors using only my good foot. I don’t recommend that. I also promise this is the last foot reference which will ever appear on this site.

Number of raw coins we acquired here: 3, including a cool 1776 Mexico 4 Reales which is the best one we’ve had a chance to buy in, well, ever.

I successfully managed to go through another show in Baltimore without eating crab cakes even once. Just not my thing.

Our last deal of this show took place at about 3:30 PM Saturday as we sold three “regular” US coins that we received in trade to another dealer at our cost just to move them along.   The salient point being that we take lots of things in trade, offering competitive prices on all – even on coins that don’t exactly fit our business model.  So if you have coins you want to trade toward items on our website, let us know and we’ll try very hard to make a win-win deal.

I think our flight home from Baltimore has been delayed virtually every time we leave this show. Except on Saturday night, when despite the lousy weather and a wildly bumpy ride we somehow managed to be precisely on time. Not sure I understand that, but not complaining.  Since it meant I got a decent night’s sleep on Saturday and can charge into our EB prep on Sunday and, assuming we get all of our photos in time, be ready to launch another cool new list this coming Tuesday for your collecting consideration. So be ready!