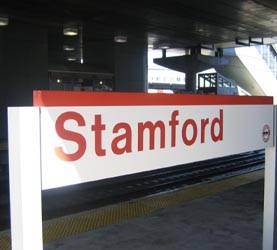 It is now 5:23 AM on Saturday the 27th, and thus the perfect time for me to recap yesterday, the very first day ever at the new Coinfest show in (to quote dealer Rick Sear) ‘bucolic’ Old Greenwich, Connecticut.

Unlike most of the metropolitan stops on the continuous odyssey known as the coin circuit, this one is being held in distinctly suburban civic center (which looks surprisingly like my elementary school) in a leafy, upscale suburb.

As is the collegial atmosphere among our coin dealering colleagues, many of whom seem really pleased to have been able to drive to this show from various points in the Northeast Corridor and thus avoid the usual schlep through airport security.

Anyway, Friday was dealer day for the 100 or so of us set-up here in (surprisingly) two separate rooms – the ‘Main’ room, and the one we are in (with the CRO banner neatly hung from a window). It’s not exactly ideal, but it’s pretty good, and it is clear that the organizers have bent over backward to put on a nice event.

As for the business, it wasn’t a bad day overall. We bought four coins, and sold four (but not the same four), and finalized a couple of transactions that had been in the works for a few weeks with dealers present at the show. We also considered a few mega-coins another dealer had just acquired and might just pull the trigger on Saturday.

I am also excited to report that our own Dave Wnuck had his first, official, genuine ‘CAC’ sticker sighting yesterday, spying an oval green sticker on a slab in Legend’s case at the show. Sheepishly, I will admit that I got tied up and never had a chance to look, but I will check it out and offer an absolutely thrilling CAC review in Saturday’s Road Report.

That was about it – we filed out at 6 PM, in the rain, and headed back to our slightly more urban hotel setting for dinner and an early evening.

We do look look forward to Saturday and the appearance of the public and expect a pretty good show.

Saturday began with breakfast in the Westin Hotel with a dealer friend, followed by a treacherous, wrong-turn filled drive to the show through an impressive rainstorm. But we made it just fine, pulling into the civic center parking lot at a taught 8:15 AM, giving us precisely one hour and 45 minutes to turn on our lamps, uncover our cases and psychologically prepare ourselves for the public’s arrival at 10 AM.

With our typical CRO efficiency, we used that time to do some business, and found the pre-show period to be robust. As an indication of things to come, we ended up selling 3 coins before 9 AM, and a couple more before the public started to mass by the entrance at 9:45.

Come 10 AM, there was an impressive crowd in the lobby, and soon heavy numismatic traffic filling the aisles in both rooms of the bourse.

And it pretty much continued that way until about 3 PM, with healthy activity, good sales and good purchases for us. Late in the day was decent too, though the crowd had thinned out a lot by then.

Overall, the day went very well and we were pleased, despite one (1) overzealous fire marshall who tried (unsuccessfully) to clear everyone out of the building during the late morning. But that turned out to be just a minor blip, soon forgotten in a sea of coin-commerce.

But let’s get to the meat of this report, our impressions of the CAC, launched here at this show, stickering coins (for collectors, for FREE) right there in the lobby.

We talked to half a dozen collectors who had brought coins specifically to be stickered, and in most cases we saw the coins and discussed them with the owners before they were submitted.

And then, an average of a couple of hours later, we saw the finished results, with most of the coins submitted coming back with the (soon to be familiar, we suspect) small, oval-shaped, metallic green CAC sticker neatly placed on the right side of the slab label, and the maroon and white (and intended to be removed) CAC explanation sticker covering about 40% of the back of the slab.

So what what did we see? What was it like? And what did we think? Calm down, we’re getting to that:

1. Based on what we saw from the collectors who visited us prior to making their submissions, this was not a random sample of all coins in holders. It seemed to be generally knowledgeable collectors with good taste who had brought some of their better material to ‘test’ the CAC.

2. We saw an approximately equal number of PCGS and NGC coins submitted.

3. Based only on our own small sample size, the coins that ultimately received the CAC sticker were, generally, nice coins that seemed correctly graded. Which is to say that they were not just the coins that were spectacular for the grade or obvious upgrades. Nor were they all 100% original, undipped coins. They were a mix of original looking and, in the case of silver, white(r) coins.

4. Coins either received the green CAC sticker, or a simple, red, round (cheapo, intended-to-be-removed) sticker indicating that it had been reviewed, but didn’t meet CAC standards.

5. In one collector’s box, about a dozen coins were submitted and just a single piece received the dreaded red dot – a beautiful, 100% original and attractively toned Capped Bust Half Dollar in a PCGS 63 holder. The coin was what some might call AU63, with a great look, but some cabinet friction on the high points. Still, we would consider it attractive for the issue and grade, and dramatically more appealing than all sorts of dipped and ugly 63s we’ve seen through the years. If this coin is an indication of a non-CAC-able coin (a new phrase possibly just coined by me), it seems like there are going to be many, many coins out there which won’t meet the CAC standards. And maybe that’s good.

6. We should caution that we did not sit around all day studying CAC submissions. We were busy buying and selling coins, and so what we saw was undoubtedly a small percentage of all the coins submitted. So it is possible that some guy on the other side of the room talking to a different group of submitters may have come away with a totally different impression.

7. From the limited number of completed submissions we have personally seen so far, CAC’s conclusions seemed pretty reasonable to us.

I’m typing this comfortably seated on my couch, back at home, after a very nice Sunday at what turned out to be a superb Coinfest show.

It was well-organized, well-marketed, held in a great location and the results were terrific. What more can you ask for? And based on that, we’ll be back (heck, we didn’t want to leave!).

To be honest, we weren’t surprised that it was run well, or that the location was good, but we were a bit surprised that the crowd seemed to be comprised of almost entirely serious collectors who were there to buy. And buy they did. They also sold some cool coins, and, as a result, we picked up a lot of neat things for our inventory (a few of which sold just a couple of minutes after we bought them, and will therefore, unfortunately, not be appearing in an upcoming Early Bird.  But don’t worry, plenty of other things will – ).

And in the ‘strange but true’ category, I bumped into an old grad school classmate that I hadn’t seen in years (since I last bumped into him in an airport). Turns out he’s a collector and I never knew it.  How cool is that?

So, in conclusion, it was a blast.

But there’s no time to reflect on the past. We have a lot of work to do this week (starting in about 12 hours). We’ll be sorting out our NEWPs over the next few days, updating the site, working on a few auctions and gearing up for our next show, in Baltimore, in a couple of weeks.

And that’s all I have to say about that.