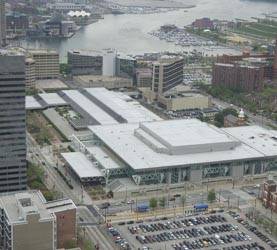 With the greatest of ease and not so much as one travel hiccup, misstep, misshap, lost bag, delay, detainment or quarantine, we have arrived in Baltimore once again for what we exect to be a thoroughly delightful Expo experience.

And why wouldn’t it be?  With the entire numismatic community here, a veritable ton of numismatic auctions, a gazillion and a half coins to buy and/or sell and the added bonus of the always entertaining C4 (Colonial Coin Collectors Club) convention on site we have the makings of a really, really (really) big show.

And we will be here for all of it, bidding, buying, selling, grading, trading and, importantly, schmoozing, and then blogging about it each and every day right here in this space.

In a scene which could have been entirely avoided with some better planning (i.e. by doing this stuff in manageable pieces earlier in the week) your author began Thursday with some h-a-r-d numismatic labor, hauling all the show supplies, computer equipment and a giant pile of auction catalogs to the convention center like a pack mule at 7:30 AM.

Then stood in line to get my dealer credentials, retrieved coins from the security room and pronounced myself ready to begin the show by sitting in the lobby with a bunch of other dealers for 20 minutes until they let us all in at 8.

At which time I raced to our usual table #304 and set up everything as fast as humanly possible, which for me turned out to be an impressive 15 minutes to lay out the cases, attach the lamps, plug everything in, hang the banner and put the coins out.

And then lock back up so I could race around the floor looking for cool things to buy, of which I did very well, buying about 30 federal and world coins over the next hour or so from about a dozen different sources in the room. Then coming back to the CRO table just in time to organize the display and make the first few sales of the day, including a transaction in which a serious collector casually showed me this nifty signature he had picked up recently:

That’s some guy named G. Washington for those scoring at home.

With sales picking up some serious momentum during the day and finally finishing on a high note with a multi-coin deal late in the afternoon which all added up to a real good Thursday.

Even though we had to end it early in order to run over to the Sheraton for the C4 reception at 5-ish, which itself was curtailed by the start of the Stack’s-Bowers Rarities Night auction back at the convention center, which I also had to leave early to race to Sullivan’s for a dinner reservation with friends at 7.

Phew. That was tiring.

As was coming back here after dinner, late, and spending another couple of hours going through my auction bids for Friday until I finally had to go to bed about 1 AM in order to be ready to do this all again on Friday.

The extensive results of which will be described right here on Saturday AM.

Nicely contrasted with yesterday’s hard-working start, on Friday I casually strolled over to the convention center carrying only a very light cup of coffee, briefly parked at the CRO table and then hit the floor running once again looking for interesting NEWPs.

And again I did well in the early hours, buying another half a dozen coins of all sorts and adding them to the pile of ‘NEWPs which will be appearing in an upcoming Early Bird’.

Returning to the CRO table just in time to receive formal confirmation of the previously rumored news that one of the largest extant colonial collections will be coming to auction starting at Heritage at the 2015 FUN show and continuing on for 3 more sessions through 2016.

Which when combined with the superb Stack’s-Bowers offering in March guarantees that colonials will be in the limelight for a while now.  And, if this is anything like the results we saw during the nearly two dozen Ford sales in the earlier 2000’s, I think we can expect a colonial renaissance of sorts with new entrants coming into the specialty and some of the non-specialist dealers who participated aggressively back then once again re-entering the fray in a big way. That’s my prediction, anyway.

Meanwhile, back to Saturday in Baltimore, we had quite a nice day of consistent sales activity through the afternoon in all categories, including the sale of my single favorite coin in inventory – a fabulous 1935-S Peace $1 – which I am frankly surprised lasted as long as it did. Illustrating once again that I never have any idea what coins will sell or in what sequence, but always know that nice pieces eventually find delighted owners.

And then in a recurring theme at this show, I had to seriously multi-task, preparing for the 5:00 PM start of the Stack’s-Bowers colonial session while still working with customers at the table before eventually racing up to the third floor to participate in the sale live and in person.

Where I remained for the next many hours, bidding intermittently, snagging a few neat coins, losing out on some others and generally observing a mixed bag of activity in a session in which quality was widely varied and results ranged from very, very weak to alarmingly strong.

With your author getting back to the hotel just in time to respond to the emails and inquiries which had accumulated during the day, confirming a couple of pretty good deals both buying and selling, eating a late, European-style dinner and finally going to bed around 1 AM.

Saturday we’ll be back at it, finalizing some pending deals, doing some lot viewing of the upcoming Newman coins, getting our last grading results and eventually packing up and heading home.

From where our last RR installment of this show will be posted from the comfort of the CRO couch no later than Sunday AM.

With a long to-do list on Sunday I was up early working on Stack’s-Bowers final session bidding and blog writing at the hotel, then packed up and checked out at about 8:30.

By 10 AM I had already picked up our last show grading, filled out the paperwork to reserve our table for the next Baltimore Expo in March, viewed (for the 2nd time now) the Newman coins of interest in the upcoming November auction at the Heritage table, consigned some CRO coins to auction, had some coins photographed, worked on a possible deal for January and viewed some coins for sale at a couple of different dealer tables.

Which made for a very productive morning even before I got back to the CRO table.

But once there things continued at a pretty steady pace, with quite a few customers stopping by, some to finalize pending deals from earlier in the show, others to look at new coins or just to chat for a minutes.

Which kept me fully occupied (as I had been for nearly this entire show) right up until it was time to pack up and head for the airport.  A process which, despite years of experience and careful planning, usually deteriorates into absolute chaos and a mad rush to get out the door. Which is of course exactly what happened on this day.

Fortunately I made it, and, it turned out, with enough time to spare to have an excellent lunch with a collector friend near the gate where we discussed Connecticut Coppers, upcoming auctions, a new and interesting book he is writing, and expert-level European travel.

So by the time I boarded my flight everything seemed just great, right up until the cabin crew scared the heck out of all of us by alerting us to severe turbulence about 63 times during the flight, couldn’t serve us any drinks, kept telling us to tighten our seatbelts, and generally acted like all hell was going to break loose at any moment.

Alas, it never did, so I arrived back home unshaken, relaxed and ready to get some serious rest after one of the most tiring shows I can ever recall attending. Not because so much business was being done (it wasn’t), more due to a show, auction and C4 club schedule of overlapping events that forced dealers, like me, for example, to work pretty much non-stop from morning until late evening everyday.  Oh well.

But after taking Sunday off we’ll be back at it soon enough, as we start work on our next Early Bird which will go out Tuesday if the images are ready, or one week from Tuesday if they aren’t.  A timing decision we will make Monday at about noon and post on the home page, as always.