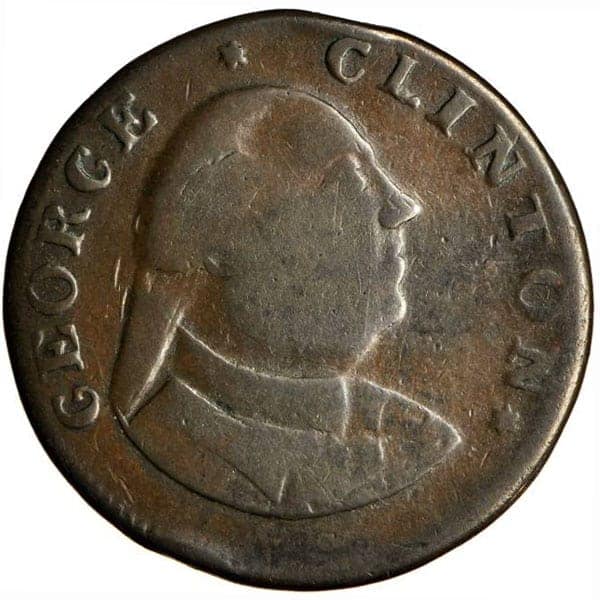 W-5790 variety, struck at Machin’s Mills and bearing an obverse portrait of Governor George Clinton in an apparent attempt to secure a coinage contract with New York.  Considered to be Rarity-7 with 11 examples traced (with a number of those impounded in one museum or other).

Before the present specimen, the last George Clinton Cent to trade publicly was a dark, rough piece in the “Marshall’s Sale”, a government auction of confiscated coins held in Boston 12 years ago.

There was no specimen in Ford, Oechsner, Norweb or in many of the most famous collections ever assembled.  And of those that did have a Clinton Cent, many have owned the same example through the years, such as the VF coin with a rim ding which appeared in the Groves sale in 1974, the Laird Park sale in 1976 and the Robison Collection in 1982, and the piece offered here, which has been owned for the last, oh, 7 decades by a veritable numismatic Who’s Who.

This is indeed the first example we have ever had the opportunity to buy, and the first one offered in any dealer’s inventory in a very, very long time.

And while this piece is not perfect, with some flatness at the rim at 1 and 7 o’clock on the obverse, the color is a nice, natural, chocolate brown, the surfaces are smooth and all but unflawed, and the overall appearance suggests to us more VF than F.  Regardless of the grade assigned, this is a pleasing and highly collectible example of an issue that is simply never available (except right here, right now).

Complete this form and we’ll contact you straight away to discuss.

Our most recent Early Bird Notification went out on Tuesday, May 26th at noon east coast time
Back to Top