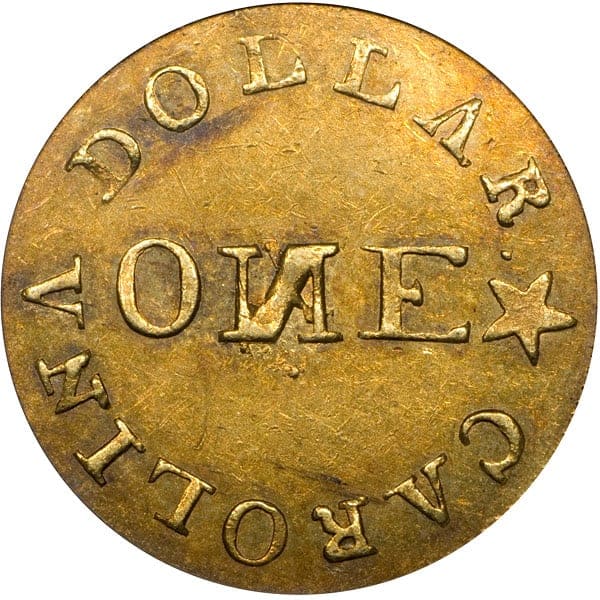 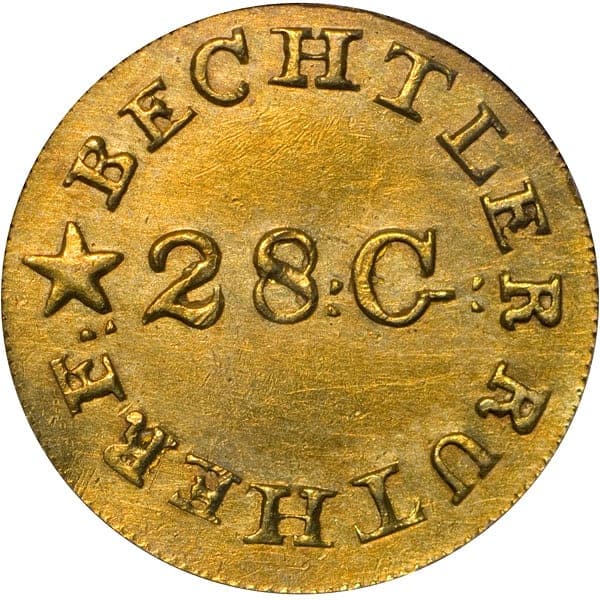 A neat piece and another Museum Quality Coin on our site.

It was struck by Christoph and Augustus Bechtler sometime around 1840 in Rutherfordton, North Carolina from native gold mined on site.

A look at our enlarged photo of the denomination side reveals that the die cutter, besides engraving the N in ONE backwards, used upside down V’s instead of A’s in the legends. This example is very sharply struck, such that you can also see the vestiges of what appears to be the smaller, original, correctly oriented(!) N that he partially effaced before executing the larger, backward letter.

In describing the $1 denomination in his Encyclopedia, Breen states the following:

“Similar pieces with normal N, from Newcomer and in the ANS (without punctuation), are almost certainly early counterfeits. The fact that counterfeiters made imitations of the Bechler’s coinage is a backhanded compliment to them – a testament to the acceptance of their coinage by the local populace.”

Again quoting Breen: “For decades even after the Civil War, many people in the South never saw any gold other than Bechtler’s . . .”

The coin itself is a really wholesome example of this series, and one of the scant few remaining pieces that hasn’t been run through the mill, conserved, stripped of its original skin (and its dignity) and placed in a shiny new NGC MS61 holder.

This one is the real McCoy, and is worthy of a serious collection.