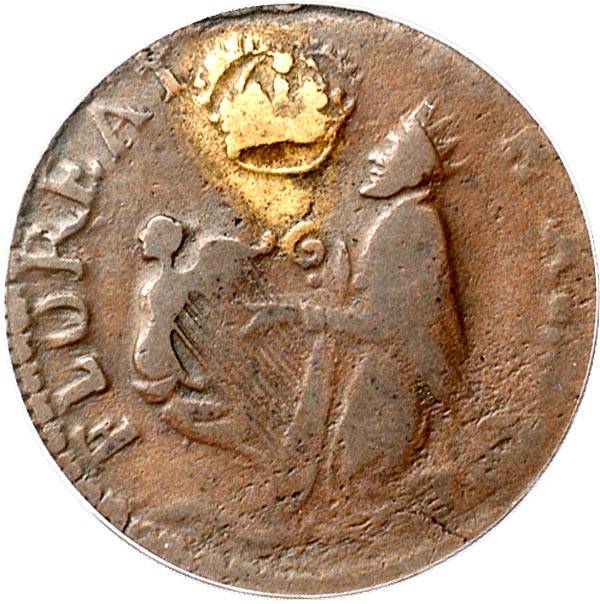 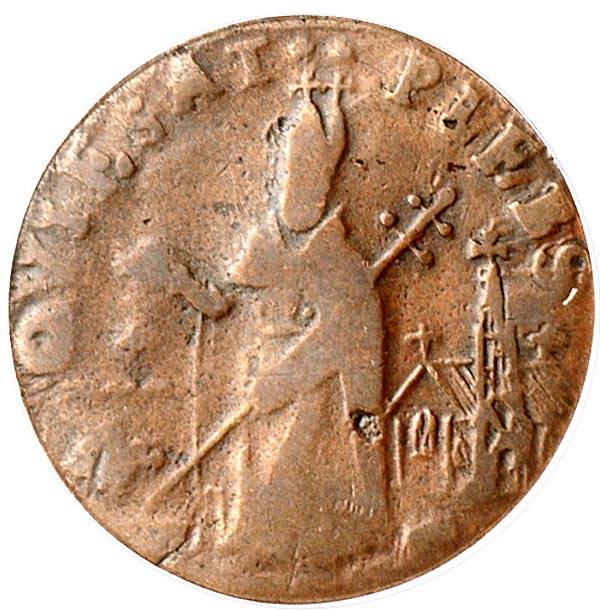 Breen 214, Griffee 51-6/2a variety. Listed in the Redbook as the ‘No C in QUIESCAT’ type. This is the first of this issue to be graded at PCGS, where it has been given a distinct coin number differentiating it from the regular St. Patrick Farthing type and labeled ‘No C’ on the holder.

The intended legend QUIESCAT PLEBS (May the People be at Ease) appears on every one of the literally hundreds of St. Patrick Farthing varieties, but this is the lone variety with the spelling error.

However described, this is a major rarity in the colonial series. There are less than 10 known to us, of which we believe this piece to be second finest extant. Notably, this variety was missing from the Garrett, Norweb and Ford holdings as well as most every other major colonial collection ever formed.

In our view, this is a coin which would be significantly more popular and more valuable if it wasn’t so rare – as it is, most colonial collectors, even specialists, have likely never seen one.

And this is a lovely example. A very wholesome, original chocolate brown coin on a nice planchet (for this type); the others we have seen are all corroded or rough. The brass splasher is large and an attractive bright gold color, while the reverse legend error is as well defined as it ever comes.

If this were a common variety of St. Patrick Farthing it would be considered quite pleasing for this grade level. As the QUIESAT error, it is exceptional, and quite literally irreplaceable.

Prior to this piece, the last QUIESATs to sell publicly were the John Griffee coin, a rough, raw VG nowhere near as sharp as this piece, which realized over $9,000 in the November, 2003 C4 auction, a raw AG3 which sold for $4,625 in the 2004 Glen Ivey sale and another nearly slick coin described as AG3 which brought $6,325 in the 2007 Stack’s Americana sale (an image of which can be seen in our 3rd photo below).