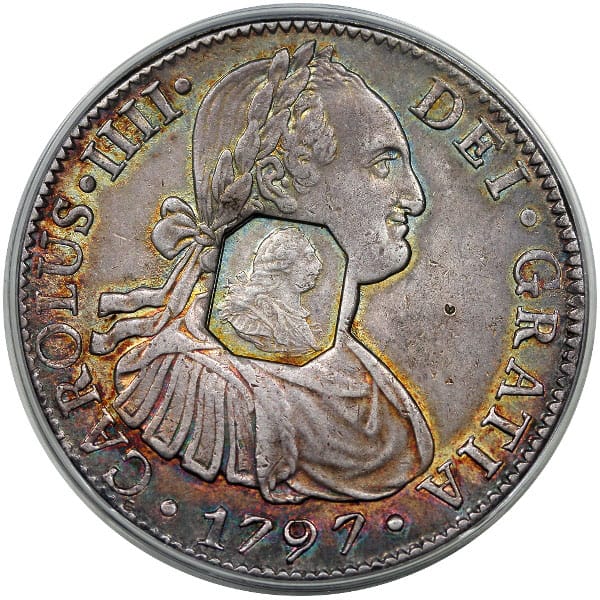 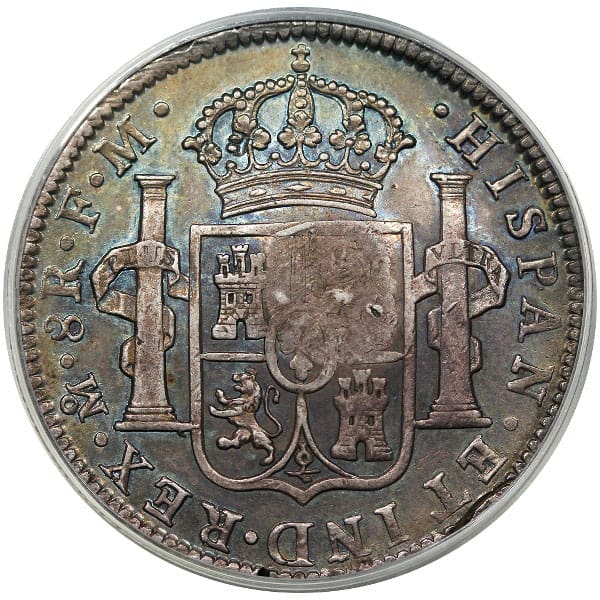 KM-656 variety, with an octagonal countermark of George III on a 1797-Mo FM Mexico 8 Reales.

And a fascinating piece this is –

Facing a desperate shortage of silver coins in 1797, the Bank of England re-issued altered foreign coins from its reserves. Some half a million pounds worth of Charles IV Spanish ‘dollars’ were counter-stamped with a small engraving of George III. The majority were counterstamped with a small oval portrait – a rare few with the large octagonal counterstamp illustrated here.

The re-issued coins, with a value of 4 shillings and 9 pence, were ridiculed and scorned. “Two Kings’ heads and not worth a crown” was one phrase used to describe them. (A ‘crown’ in this context meant 5 shillings). A more creative nickname was “The head of a fool stamped on the neck of an ass”.

Ultimately, the issue failed when enterprising individuals took to unofficially counterstamping lightweight or base Spanish dollars.

A few years later a more successful issue of dollars was made by the Bank of England. In 1804 Matthew Boulton, the business partner of the steam engine pioneer James Watt, was employed to completely erase the existing design on full-weight Spanish coins and stamp them as Bank of England Five Shilling Dollars.

And thus this interesting, unloved and short-lived issue was no more.

This coin itself is a lovely choice AU, spectacularly and beautifully toned in vibrant golden orange, aubergine and teal on the obverse, sea green and blue on the reverse. The counterstamp itself has toned in the same lovely pattern as the host coin but in miniature, creating a rather remarkable site we haven’t encountered before on any coin.

The only fault we can find is a tiny pit in the right obverse field, and a few marks opposite the counterstamp (and certainly caused by it) on the reverse.

In all, an historic, rare and absolutely stunning coin which couldn’t be replaced at most any cost.