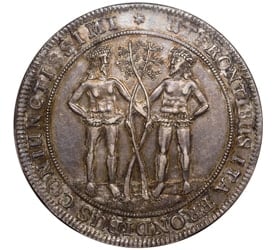 Well, it’s been about 6 weeks since the birth of the “new” CRO, which I hope most observers / collectors / dealers and visitors to the website have concluded looks very much like the “old” CRO. There will be changes coming, though, including some updates to the look and content of the website over the next few months which I think people are going to like (at least I hope they do – otherwise I am spending an awful lot of time cranking out ideas for no good reason).

As for the business itself, I am pleased that the activity level has been just about non-stop, to the tune of about 10 boxes being shipped out a day on average, with a high of an absurd 33 on one particularly busy Thursday. In fairness, a bunch of those packages were destined for grading and photography, but IMO it still represents an impressive amount of packing, sealing and taping.

In some of those boxes: German States “Wildman” Thalers since we sold 6 (six) in the last 30 days.

Biggest frustration so far: It took about 4 weeks for the processing company to send us our shiny new credit card reader (during which they kept insisting it had already been sent to us, twice, and each time signed for by someone named “Mr. Blige” who I can assure you does not work here). All set now though.

Latest CRO innovation:  We are now writing fractions like this ½ instead of like this 1/2 on the inventory page, which I believe is tidier.  Unfortunately, I have not figured out how to write 1/6 in that same format, which is sometimes necessary for German coins.  So if anyone can show me how to do that, I’d appreciate it.

We’ve been lucky enough to handle what for us are some extremely highfalutin rarities this month, including 3 coins at or above the 100K threshhold. It never ceases to amaze me that these sorts of coins sell faster than common coins in the few hundred dollar range. And if that continues to be the case, I cannot see any reason not to buy more of them.

Such as at some of the upcoming auctions this fall, where we are expecting a lot of cool things to surface and where we plan to be as aggressive as ever pursuing them. But if anyone has anything really great to offer, we are equally delighted to buy via private treaty too. Just as we have done with a lot of colonials and federal coins lately, most of which we bought because 1) We really wanted them, or 2) We wanted the seller to continue to offer us cool things in the future. We were less enthusiastic about some of the more mundane type coins that we thought would linger on the site, and our offer on a really expensive piece of proof gold was rejected. Oh well.

We are also regularly offered world coins for sale or trade, to which we typically respond as follows: We are primarily interested in issues that circulated in early America (Pillar and Portraits, gold Escudos, Spanish Pistareens, etc.), or anything with unusual and interesting motifs (the aforementioned Wildman Thalers, Sun Face issues from South America, Chinese Auto Dollars, etc.), or anything else that is so spectacular and beautiful that we have to buy it even if it doesn’t fit in any of the above categories (like the English coins currently on the website, for example). That formula seems to be working so far.

What’s not working? The lead times involved in getting a new raw coin graded, photographed and CACed are running longer than we’d like. Which means we can’t afford to wait to send larger groups of coins in, and instead we’re sending a few at a time nearly every day. Which costs money, and takes more time to package and ship. This might be a temporary issue (let’s hope), or it might be the new reality.

Of course, if we buy as many coins as we intend to this fall, it probably won’t matter too much, since we will have plenty of coins for the website.