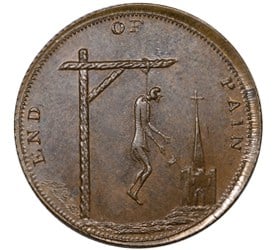 Now that we have a few week lull between shows in Pennsylvania, it seems an excellent time to address the following question:  Why do we have two shows in a row in Pennsylvania?  To which the answer is of course:  We have no idea.

Actually, we do have an idea, which is that there are competing show organizers out there who are selecting their event locations and dates based on a number of criteria, none of which are to make sure that all of the other show organizers’ events are successful.  On the other hand, one would think attendance at your own show would be better if it was not held right after or right before a competitors’ pre-existing show, or one in the same or nearby venue.  In any case, and as Adam Smith explained to me, the free market has a way of sorting these things out, and I am confident that people will continue to put on major coin shows as long as they are commercially successful, which in most cases will mean that they are not all in the same state, or held too close together.

Speaking of shows, we had a nice time at the last few, though we continue to observe an unsurprising trend, namely that shows have become increasingly wholesale affairs.  Partly by structure (PNG Day anyone?), but also because a larger share of coin buying and selling has moved to what is known as ‘the internet’ (at least based on an analysis of our own business, which is something we are perhaps better qualified than anyone to speak about).

But we’ll still maintain a full schedule of national events (with some little ones thrown in, too) because we like them, we have done well at them, and, importantly, they are always a source of new, fresh coins for us, either on the bourse floor, or in the auctions where we can view lots in hand and bid in person.

Breaking news:  We will be transitioning over time to a more extensive use of CRO and a diminished use of Coin Rarities Online.  In the meantime (and for the foreseeable future) we will answer to both.

One of the fun parts of the business is the stream of new customers we have and some of the interesting collections / accumulations they are building:

Lately we’ve had a greater percentage of sales than usual which have involved a trade-in of a downgrade or other item.  We are always interested in such deals and try to find a way to make it work for both parties, but we are more enthusiastic to buy or trade for coins that have been off the market for some time (as opposed to something which was purchased off of our list 60 days ago, or which has been recently posted in a chatroom or on Ebay repeatedly where a lot of potential customers have seen it already).  Hey, of all the attributes that make a coin desirable, freshness is an important one.

For the first time, we actually have a few PCGS Genuine holdered coins in our inventory (though not imaged yet), since we believe that some of these can represent a compelling value vs their straight graded brethren.  We will have three strict criteria though:

We continue to be amazed / shocked at some of the outlier auction results we’ve seen, where a coin all of a sudden sells for 4 or 5 times our pre-sale estimate, typically while all the dealers and serious collectors in the room look at each other with that “What is the deal with that?” look on their face, though often accompanied by a slight undercurrent of “Did I just miss something good there?”, followed by a glimmer of “Maybe I should seek out the buyer since he surely knows something I don’t and offer to split it with him.”, but ultimately concluding with “Nah, that guy must be crazy.“.  I would guess that in at least a small percentage of these cases someone simply had to have been bidding on the wrong lot, since most of the other possible explanations are really unlikely (e.g. it was a previously unknown die variety unmentioned in the catalog and missed by all but 2 guys).

It’s always interesting to pick up and look through any random old auction Bowers or Stack’s auction catalogs, often unexpectedly seeing a coin we have handled, finding a previously unknown provenance or an additional example of something to add to our extensive condition census database.

I have to say that our recent grading submissions have been really tough, which, in addition to the disappointment, does immediately make me think of the time we spent filling out the grading form and standing in line to submit it and the alternative uses we had for that time (such as updating this section of the site more often . . .).