I am pleased to report that this, the first installment of the Long Beach Road Report, is being written from the comfort of my flight to California, in a window seat that will not recline, strategically surrounded by young children who were all screaming earlier, but have since stopped.

Thus creating a lull during which I can crank out this description of what I expect to happen over the next several days.  Starting with lot viewing on Wednesday morning, followed by a flurry of coin grading, then what I predict will be an active dealer set-up and finally the show itself.

And, if the last month has been any indication, I really think it’s going to be a good one on both the buying and selling side.  Of course, I can’t predict what I might find to buy at this show, but I have plenty of cool things to sell, including many new coins in all categories that no one has seen before.

But whatever happens, the details will be described here, every morning, with our usual disclaimer that, because this show is in the pacific time zone, the RR may not be posted until mid-morning on the east coast.

For the first time that I can recall at one of these Long Beach shows, it was raining on Wednesday morning when I walked from the hotel to the convention center.

Fortunately, numismatics is primarily an indoor activity, and so I was able to complete my Heritage US and World coin lot viewing, as planned, in a very efficient 3 hours during which I was not exactly overwhelmed by the offering (including some items that looked fantastic online, but were not to my liking in person).

Which meant that I found less to bid on than I had hoped, identifying maybe 25 coins in total that I will try to buy in in the various sessions this week.

Do not worry, though, since I partially made up for it at dealer set-up, spending about 200K in in the first 30 minutes on all kinds of things which will eventually make their way to the website.

But not before a lot of them get graded, which explains why I was filling out PCGS and NGC forms for the better part of the next 2 hours or so.  Admittedly, this also included pent up grading that had accumulated at home since the ANA, all of which I was absolutely delighted to get out of my back case and into the grading services as fast as possible.

And it was fast, mostly because I was not interrupted by very many customers (of the dealer or collector variety) during what was a particularly quiet set-up day.  One prominent dealer even told me that they had sold a grand total of not one single coin all afternoon, which made me feel waaaaay better about having written 3 invoices for 5 coins in total.

And while sales were not exactly on fire, the same cannot be said for the salsa on the Mexican buffet cart (a tradition here in which free beer and Mexican food are wheeled out into the aisle about 4 feet from my table).

While I would usually go easy on this sort of thing, I actually turned this into an early dinner which would hold me as I went back to the hotel, figured my auction bids, entered them in the computer, answered email, called customers, watched the football game and then turned in early since by then I was jet lagged and exhausted.

Thursday I hope to see some robust retail traffic at the show, at which time I will be ready to entertain them with neatly arranged display cases and my undivided attention.

One of the changes implemented this year in Long Beach is that the show opens to dealers at the extremely civilized hour of 9 AM each day (as opposed to the ungodly 8 AM of past years).

So what am I doing with my extra hour of bonus time each morning? I’m glad you asked that question, since I had already prepared this brief list:

And so when I walked over to the show on Thursday, I was absolutely, totally and thoroughly ready for action.

Which would begin almost right away, with the sale of a handful of type coins to another dealer.

Followed by some high speed scouring of the floor, during which I managed to find some cool coins and commit a coin buying faux pas in one fell swoop. There I was at another table when I found a whole bunch of extremely cool coins that I was interested to see. So the dealer starts pulling them out and stacking them up for me to look at, and, in the process, he props the case open.  So I, in a moment of temporary insanity, reach in and pull out one additional coin to add to the stack. At which time I nearly had my head (or hand, or both) taken off and rightly so, since I did not ask first, and I really don’t know this guy well. I did apologize profusely, but I felt like an idiot. In any case, I’m pretty sure I won’t make that mistake again, and I did end of buying a bunch of those coins.

Meanwhile, back at the table, I actually did some meaningful retail business, selling every Indian Head Cent I had in inventory to one highly focused buyer.

Followed by the sale of two new highfalutin early English coppers to a collector / dealer. And while I am disappointed that neither of those coins will now make it to the website, at least I managed to get a PCGS TrueView picture of one of them before it disappeared for good: 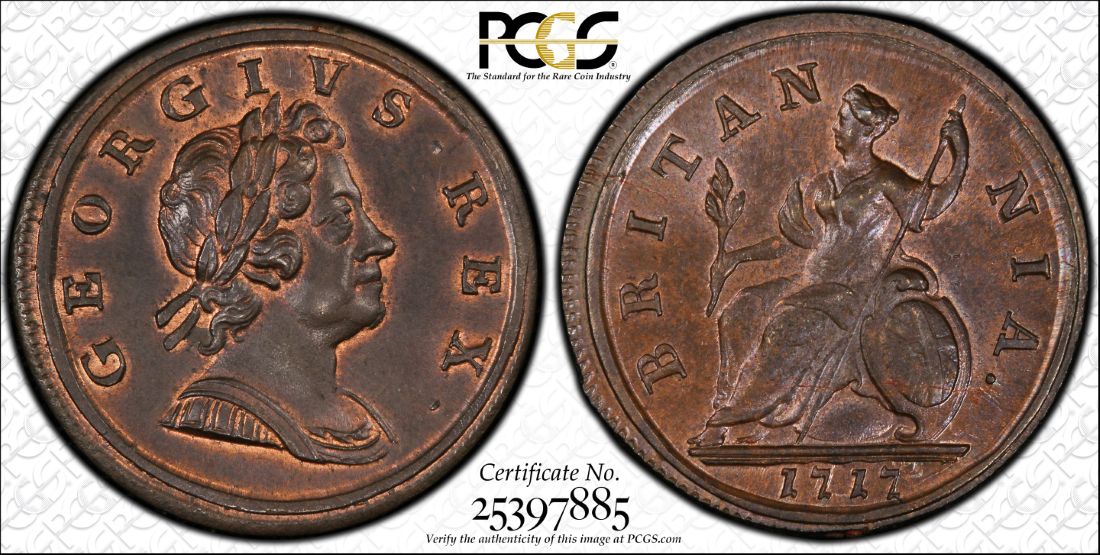 And then, late in the afternoon, focus turned to the Heritage auction as I formulated my final numbers, then headed out to an utterly spectacular dinner at Michael’s on Naples with another dealer from whom I bought something wicked expensive earlier at the show.

And then came back to see that I managed to buy a number of the coins I bid on in the HA session, while getting absolutely creamed on others. And when I say creamed, I mean it, to the tune of final selling prices on two coins which were nearly double what I thought were my reasonably aggressive bids.  Oh well.

Friday I look forward to slightly more successful bidding, some additional retail activity and the onslaught (in a good way) of my grading submissions coming back, the details of which will be described here on Saturday AM.

In a mildly unexpected development, Friday turned out to the busiest day of the show (so far), as I was buying and selling with alacrity from about 9:30 AM until 5:15 or so, including, but not limited to, the following: 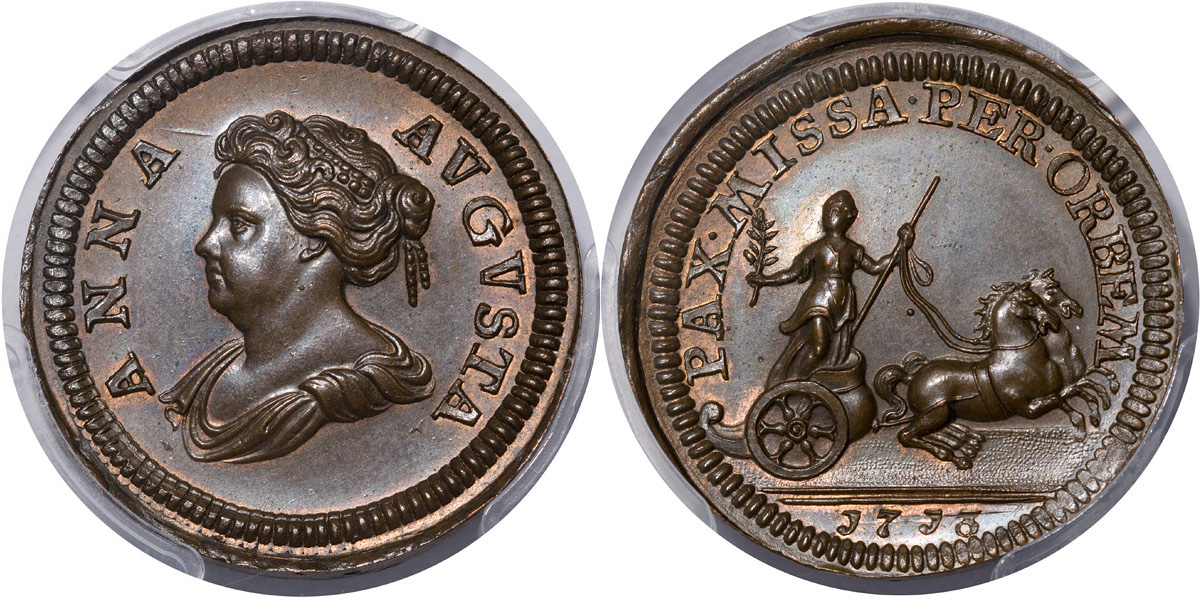 While commercial activity was good throughout, grading results were returning at a mere trickle with about 20% of my submissions now back and some really big ones yet to re-appear. This is more or less par for the course here, in my experience, at least for the esoteric and colonial submissions which generally seem to come back on Saturday AM.  And while at the last LB I had an early flight and snagged my coins literally minutes before racing out the door, this time I am here for the duration and expect (hope) to get everything back in a significantly more relaxed fashion.

Also accomplished on Friday: Consigned coins to auctions both for CRO and on behalf of customers, viewed the cool and unbelievably esoteric collection of caribbean silver assembled by a dealer friend, schmoozed with a collector I last saw at the FUN show in 2011, checked out the Registry Sets of Walkers on display in the middle of the room, and, finally, memo’d a handsome Higley Copper to a guy named Dave Wnuck who left early to fly to New Jersey where he will present it as a show and tell item at a Colonial Numismatic Barbecue (I’m not making this up) that your author was unfortunately unable to attend (since he is workin’).

And then I headed back to the Hyatt, where in typical Hollywood fashion I stumbled upon a TV show which was being filmed in the hotel lobby, and which involved significantly more people and equipment than I ever could have imaged. I’m not positive, but I was told it was either an episode of Arrested Development, or something called The Next. And though I offered my services in a recurring role as the “The Coin Dealer”, I was informed that it was too late to revise the script.

Saturday I will be at the show until the bitter end, which should give me ample time to get organized and to conduct any additional coin business that avails itself during the day, and then fly home real late.

From where the last installment of the LB RR will be written on Sunday AM, and will include a recap of the grades I pick up on Saturday (unless they are secret, in which case I will merely hint at them).

As I sit comfortably at home in the CRO armchair watching CBS Sunday Morning, I am reflecting back on a most unusual Long Beach show which (pretty much the opposite of most every other show I’ve attended in recent years) started slowly, gained momentum everyday and finished with a numismatic flourish.

And while I cannot explain the trajectory, I was delighted with the outcome, for which I have to credit the effort being made by PCGS here to energize this show, as they seem to be doing most everything possible to improve it, and it looks and feels like it is working.

Both collectors and dealers alike seemed to be in a buying mood here, at least for a lot of the cool stuff in dealer cases and in the Heritage auction, and the show ended up being active, vibrant and, at times, downright busy (as also evidenced by the periodic long lines at the PCGS table directly in front of my face on Friday and Saturday AM).

Speaking of grading, I thought it was extremely fair here, and I had a large sample size (at least for me) from which to judge. Success for me is measured not by how many upgrades I score, but by getting results that mostly match my expectations and that allow me to sell the coins as I had planned (including a bunch of coins that will be on Tuesday’s EB, and some that won’t – like the 1786 Immunis Columbia in our archives which we last handled about 6 years ago as an NGC coin, bought back at this show raw, submitted here and got exactly the Ch. XF grade I had predicted when I wrote that old description waaaaay back when): 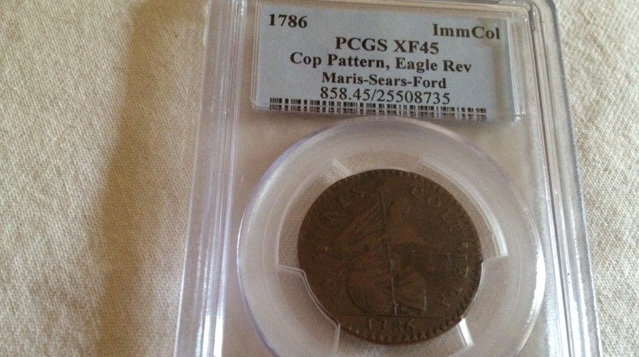 So by the time I headed out on Saturday afternoon, I was in a good mood, had a larger than anticipated pile of invoices and checks and more than my fair share of new purchases – with the end result being that I packed up exactly the same number of boxes I showed up with, though of course many of the coins were different.

The only snag I can report is that the hotel was so unbelievably busy that it was nearly impossible to simply navigate through the lobby to pick up my bags and grab a cab to the airport, resulting in one of those chaotic races to the airport to catch my flight and avoid having to sit around for 10 hours waiting for the next one.

But, as you may have already surmised, I did make it, allowing me to put the finishing touches on this RR right now, sign off, rest up and then get ready to start writing the aforementioned EB so that it is ready to roll on Tuesday.